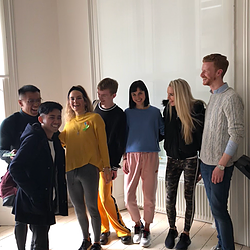 Emma took part in Mental Health Reform’s Stories Project in 2018. The project focused on providing public speaking and media skills to those who have experienced mental health difficulties, their family members, and those working with people who’ve experienced difficulties. Emma wanted to share her experience and did so during the BFEI Mental Health Week.

Mental Health Reform joined Emma to speak about what we do, our goals and hopes for reforming mental healthcare in Ireland. Emma has written a blog about the talk, which is below.

“So the idea of me ever sharing “my story” would not have even been a thought process last year.
After I was discharged from the hospital in the UK, for a long I did not want to be attached to that part of my life. I almost wanted to bury everything from those 3 years I was in hospital.
It was not until I realised that talking and working through what happened to me has helped an awful lot. I started to follow other people who have been through hard times and seeing them so confident and happy now was inspiring. I used to love watching them talk about how to keep well and how to look after your mind so I thought why can’t I do it?
I had to convince that inner critic that she was just trying to drag me down and there’s no reason why I do not have the ability to share my story like other people have.
I met Ross at Mental Health Reforms stories project this year. I fell in love with how passionate they are to improve Ireland’s Mental Health Services for us, the people of Ireland. The stories project brought on my confidence in relation to my story because that day every person there had their own journey and we all had a reason to share it. We came together without judgement and we shared a very special time together. I came away with the belief that I have a story which could help others and to believe I can make a change and have my voice.
Mental Health Week came up in my college and I was allowed to bring in an organization (this is where I contacted Ross).
Now I have never met majority of the people in my college in my lifetime so far but I knew that doing things outside my comfort zone has been a new goal of mine and that I could do it.
As the learning center filled with drips of people coming through the doors and then the intercom repeating the title of the talk it was becoming real.
Before I went up to speak my heartbeat was at its max I but I took a few deep breaths and of course went a little red.. I swear it was just a hot room. And then I took another breath and opened my mouth.
I told my story and afterward I took a big glass of water but you know what I did it and that feeling was worth every little thought or anxiety driven feeling before hand.
Ross presented a talk after and the students seemed intrigued but shocked by the statistics of the current and previous Mental Health situation in Ireland. Ross went out to tell the room about the work Mental Health reform do. I was so grateful MHR agreed to come in and for the college allowing this talk and week to go ahead.
One of the most rewarding moments of the week was to have someone after the talk say to me that they feel they can share their story now as they seen me share mine.
Thank you to every person who listened and to every one of you who came up and spoke to me about it, I cannot explain what it means to have so much support. I just wanna show people that there is a way out of their mess and that any setback can only make you stronger.
Excited for the continued awareness of mental health throughout the year in college and the lovely humans I am so lucky to meet everyday I am there ❤️”
Resources:
Newsletter