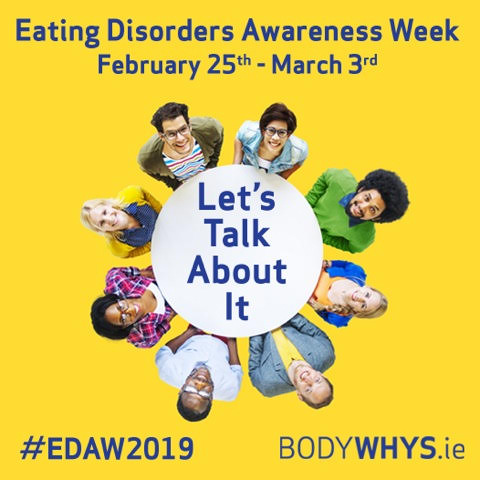 “Eating Disorders Awareness Week is an opportunity for those of us working in, or who feel passionately about the area, to generate discussion and remind everyone that eating disorders are a complex and serious issue.”

Eating disorders are a group of recognised mental health disorders that include anorexia nervosa and bulimia nervosa.  They are caused by a combination of genetic and psychosocial factors and affect up to 5% of the population.  This number has been growing internationally, particularly in adolescents and in males.  Anorexia Nervosa has the highest mortality and morbidity risk of all the mental health disorders, but all eating disorders are associated with high levels of both mental and physical complications such as heart and endocrine problems.
An estimated 188,895 Irish people will experience an eating disorder at some point in their lives (based on epidemiological projections).  Approx. 1, 757 new eating disorder cases develop each year in Ireland in the 10-49 year age group.
Most people can and do recover from eating disorders but early intervention is crucial.

If you or someone you care about has been through an eating disorder then you will be familiar with some of the challenges, both for the person and as a carer/ supporter. Family relationships change as the situation can turn to crisis and recovery can seem distant. Parents, in particular talk about how they become a carer, with much of time and energy focused on the illness that is now a large part of their family’s daily experience. Working with families – providing information and education – is therefore key to recovery and can help parents to feel they have strategies to cope and in time, move back into their parenting role. In this context, the Bodywhys PiLaR programme has been underway for the past 5 years.

When a person develops an eating disorder it affects the whole family – family life becomes stressful, relationships change and anxiety becomes the norm. Families need support to cope with this.

What other issues are out there?
Athletes are at increased risk of developing an eating disorder. The science about eating disorders and sport is well-established. The consequences for an athlete’s health, performance and risk of injury are significant. Described as a ‘wake-up call’ because of its seriousness, the Female Athlete Triad (Triad), is where athletes experience an energy deficiency with or without disordered eating, menstrual disturbances and low bone mineral density. Research has moved towards the Relative Energy Deficiency in Sport (RED-S) model which is not gender specific and you may have seen highlighted by BBC News in December 2018. Understandably, it’s a difficult situation for both athletes and coaches. Does the athlete say something and risk losing their place on the team and an opportunity to train and compete? How does the coach approach an issue he/she knows little about and what helps an athlete return to their sport after treatment?

Did you know that less than 1% of all research on eating disorders has focused on men?

Next, how about the idea, as proposed by Dr. Scott Griffiths and colleagues that eating disorders are ‘moving targets’? Essentially, the heart of this perspective is i) that the manifestation of eating disorders is affected by the world around us and ii) the cultural and social forces through which we value and scrutinise men and women’s bodies also shift over time. Does this mean that eating disorders are qualitatively different to what they were a generation ago and what will they be like in the years ahead? Diagnostic criteria have evolved, certainly, as has treatment. Ultimately, we do not know enough about the extent to which eating disorders are affected by culture in the long term. Eating disorders have occurred in China, South America and Japan and are not, despite the myth, a problem confined to Western teenage girls.

The brain remains a key point of discussion. Most research has focused on anorexia, with evidence suggesting someone’s brain structure, when they are unwell, is different to those who do not have the illness. A 2018 study on the neurobiology of bulimia and binge eating noted that illness severity, the frequency of binge eating or bulimic episodes, was linked to neural changes, along with diminished attentional capacity and self-regulation.

Sometimes people who been through treatment discuss their experience of weight restoration, with the sense that other issues were not adequately addressed. Following a meta-analysis of studies published from 1980-2017, psychologist Dr Stuart Murray commented on Twitter “Improvements in patient weight does not confer improvement in cognitive symptoms in #AnorexiaNervosa. We must elucidate mechanisms of cognitive AN symptoms, and altering these mechanisms must be the overall goal of treatment”.

Clearly, this is vital. We know how much of a hold an eating disorder can have over someone’s thoughts.

Some people with eating disorders experience social difficulties prior to the onset of illness, namely – a fear of rejection, feeling different from others and bullying and low self-esteem. It would be useful to tackle these issues from a prevention perspective. In light of these difficulties, addressing a person’s feelings and perception of social competence at all stages of the treatment process and recovery is key.

The national clinical programme aims to establish 16 teams (8 CAMHS and 8 Adult) across the country that will provide specialist eating disorder services.
There are also beds provided in the private sector in St. Patrick’s Hospital; St. John of God Hospital, Stillorgan; and in Lois Bridges – all in Dublin.

Lastly, even with difficult days, let us not forget the ordinary kindness of people with eating disorders. At a support group, person A said ‘don’t worry, it will be OK’, and person B said ‘thank you.’ This simple gesture of kindness can sometimes seem forgotten.

As #EDAW2019 begins, Bodywhys remains focused on the road ahead, by continuing to support people with eating disorders, families and working with the HSE to implement the national Model of Care for Eating Disorders.”

People can and do recover from eating disorders