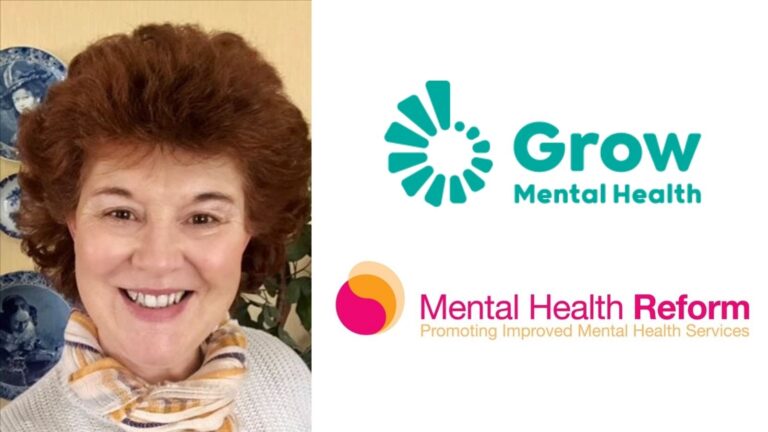 We spoke to Michele Kerrigan to learn more about Mental Health Reform’s new Chairperson. Michele was on our Board when the coalition began, and has been CEO of Grow Mental Health for the past 14 years. She represents the first member organisation to Chair the Board, which we see a positive step in the right direction.

You’ve been a Board Member of Mental Health Reform (MHR) for some time, how have you seen the organisation change and develop over the years?

I was there at the beginning of the coalition when we first came together. At that time, there were five organisations; Shine, Bodywhys, Grow Mental Health, Irish Advocacy Network and Amnesty International. We had the three service providers, we had the advocacy element and we also had the human rights element. Even at that time, we had the pillars that would be needed to move the coalition forward.

MHR was founded in 2006. A Vision for Change -Ireland’s mental health policy, had been launched and as a coalition, we wanted to hold the Government accountable in its delivery. It was a big task for just five organisations. Over the coming months and years, we developed a membership. We expanded that membership to incorporate other organisations who had something to offer, particularly organisations that had strong grassroot membership, so that we could hear the voices of service users.

This has been so important to MHR; service user voices. It has influenced how we have moved forward in our research, the advocacy roles that we take on, and also in holding the Government and its agencies to account for their commitments.

So, MHR has moved and changed -bearing in mind it’s only 15 years old. The coalition has done a lot in that time and is now recognised as an organisation that can be relied upon for quality information and research. We are also playing an important role in Oireachtas meetings and the mental health committee, which we feed into.

As a Board Member I’ve seen how MHR has grown. We still have a lot of work to do, but the organisation has certainly proven itself as the voice of mental health.

How will your experience as CEO of Grow assist you as Chairperson of Mental Health Reform?

Grow is very much a member driven organisation so we are really grassroots. As CEO of Grow, I listen to members about their concerns. They are very much involved in our strategic planning because their voices are so important to the organisation.

I think this will assist me as Chairperson, as MHR is also a grassroots organisation, so we must listen and engage with our membership. That’s what empowers us to move forward and make our conditions to Government; listening to our service users at the grassroots and listening to the member organisations.

As a service provider, Grow does that, so that’s certainly something that I will be carrying through as Chairperson. We need to engage and listen to formulate policies, hold the Government accountable, and present the views of our members from the ground up.

What do you consider to be the most pressing issues for mental health in Ireland today?

One of the most pressing issues at the moment is that the Mental Health Act needs to be updated, that is certainly a priority. It is at the bill stage but there is an urgency in it. We also need to ensure that Sharing the Vision is implemented. We need to keep the pressure on, in regard to the accountability of implementation.

Also, we need to make sure that mental health is properly funded. So far it has only been approximately 6% of the overall health budget. When we compare that to other European countries, we’re very much below par.

These are priorities that we need to keep pressing forward on, in order to provide the best possible mental health service to our nation. It is a human right to have a proper service in place, because mental health affects us all.

How do you see Mental Health Reform tackling those issues?

We make our budget submission every year, which includes a number of asks to the Government. The only way we can get reform in relation to the budget, is to keep highlighting the current deficits. The fact that we do have a grassroots membership, means that our submission is the voices of those individuals. Through lobbying and advocating for improved services, other organisations can get behind MHR and make the Government accountable for commitments that they haven’t fulfilled.

In relation to the Mental Health Act, we have to keep moving forward with our members backing us and making their voices heard, because we’re all in this together. It’s not one organisation against another, we’re in it together, we are a coalition. We need to keep that pressure on to get the Mental Health Act over the line and to keep monitoring it to see how it’s being implemented. We have a significant role to play in relation to accountability.

You represent the first member to become a Chairperson. How important are members to the coalition?

The members are extremely important because without the members there would be no coalition. To date, this is the first time that a member organisation has had a Chairperson elected to the Board, which I think is quite significant. It shows how the organisation has developed over the last 15 years.

Each of the previous Chairpersons brought so much experience and knowledge to the Board and to the organisation, without which, we would have been lost. It was so important to have those experienced, very qualified individuals over the years -that’s what we needed.

MHR is now growing and developing, members are beginning to feel that they can take on significant roles like this and lead the organisation into the next phase. I think it’s a very exciting time for MHR, having a member organisation take on the Chairmanship is a step forward.

It’s not going to be easy, we have a lot of challenges ahead of us. That said, it is exciting and I would hope that we can achieve as much as we have already achieved, and take it to the next level.

What are your next steps as Chairperson?

Firstly, to meet the whole team because it’s important that they have a face to the name, and that I have faces to the names too. I want to get to know what everyone’s roles are in the organisation. I’d like to get a sense of where they’re sitting, regarding where the organisation should be moving to.

As much as membership voices are key, staff voices are equally important. It’s a team effort from the membership, to the staff, to external people who might have a view on MHR, and I want to get that engagement process started. The pandemic hasn’t been easy for anybody and staff have been working in isolation, so it’s important to create the feeling of a new team and to make that connection.

I’m also looking forward to working with Fiona and supporting her in the development and implementation of our new Strategic Plan. It’s important that the Board has input into the Strategic Plan as well, because they have responsibility for the direction and priorities of the organisation. If we have input, there is a sense of shared ownership; that makes it easier to implement. There is a feeling that you have contributed to something very meaningful, that’s going to make a difference to people’s lives.

One of the priorities is to keep engagement going with our members, and also to expand our membership to areas that we haven’t looked at before. We are currently at 77 members which is brilliant, but I think we do need to go broader. There are other mental health organisations that we haven’t necessarily heard from, and we need to expand upon that. One of my main priorities is always to engage and listen to people at the grassroots. That is key.

Obviously there are budgets as well, I have to make sure that we have the money to do what we hope and intend to do. So, a bit of work to be done over the coming weeks. Thankfully, because I have been at Board meetings, I do have some insight.

Finally Michele, how have you looked after your own mental health during the pandemic?

Mental health is important to all of us, especially during the pandemic. Every organisation has made changes in the way they operate, including engagement with colleagues. Over the last 18 months I have continued to engage with colleagues through Zoom. However, I have missed the chats after meetings over coffee, catching up on what is going on for people. During this time, it’s been really important for me to look after my own mental health.

I love Pilates and was very fortunate that classes moved online. It’s a great way to let my body and mind heal, relax and breathe. Every movement is precise; practicing Pilates demands that you remain balanced, focus on the breath, and execute the moves. It requires full concentration, which means there isn’t much room left for other thoughts -including the anxious ones! That’s how I’ve looked after my mental health during the pandemic. I’ve also been connecting with family and friends -even over Zoom helps, and I take time out to get out into the fresh air and enjoy nature at its best.

Many thanks to Michele for sharing her time, we look forward to working with her in the future.