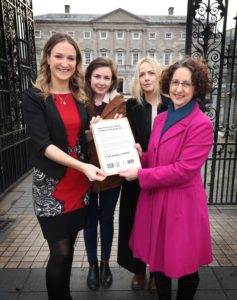 Minister McEntee will today outside Leinster House receive 12,000 signatures calling for 24/7 Crisis Community-Based Mental Health Services from the #InOurHourOfNeed campaignA petition of almost 12,000 signatures will be delivered to Minister of State for Mental Health and Older People, Helen McEntee, TD by Mental Health Reform, A Lust for Life, Uplift and Future Voices. The Minister will meet with supporters of the campaign at 10.30am, Wednesday, February 1st,  at the steps of the National Library, just beside Leinster House. The campaign is calling for the delivery of holistic, 24/7 community based crisis mental health services across Ireland.

A Lust for Life’s Niall Breslin commented, “In the last number of years mental health awareness has increased dramatically. Discussions are being had between people and in places that were not being had before, even a few years ago. We have to recognise this progress but we all have a responsibility to recognise that we now need to start seeing action. Real, tangible and impactful action. This campaign targets a focused area with a solution based approach. This can be achieved if those with influence really want it to, and no doubt save many lives.”

According to Shari McDaid, Director of Mental Health Reform, “What we are looking for is 7-day-a-week direct access mental health clinics, supported by around the clock telephone support. This is an efficient and effective way of responding to someone with a mental health need in the local community, and could be rolled out within two years. Our member organisations see the urgent need for these services to be put in place which is why they have supported this campaign. We need an implementation plan from the HSE immediately that sets out the current services available across the country and the steps to full availability of this model in every community. Providing this type of service is one reason why €35M is needed for expenditure on new developments in mental health services in 2017.”

The #InOurHourOfNeed campaign went viral in November last year, after Peter, aged 18 shared his experience of not being able to access the supports he needed during a mental health crisis in a powerful video seen by over 70,000 people in Ireland. However, the Government has not yet taken decisive action to put the much needed supports in place.Speaking last November, Peter described his experience and just how urgently the Government needed to take action. ‘When I arrived at A and E after attempting to take my own life,  I was sent through to a nurse and then put on a trolley. I did not know I was going to spend 19 hours on it, as no one was available to see me out of hours. After 19 hours they transferred me to an adult mental health ward in a different hospital. I did not feel comfortable there as a 16 year old. I am speaking out now, as I don’t want anyone else in Ireland to have the same experience as me, at their hour of greatest need.”

For further information on the 24/7 crisis mental health services campaign, contact Ray Burke at 086 171 1920 or via email at rburke@mentalhealthreform.combinedmedia.com.

A Lust for Life is a national wellbeing movement to transform how we talk about and treat mental health. For more information go to www.alustforlife.com

Future Voices is an award winning youth charity, which works with young people to break the intergenerational poverty cycle and empower them to create positive change for themselves and others. www.futurevoices.ie.

Uplift is a community of people taking coordinated action for progressive change in Ireland. We are a self-supporting independent organisation. We believe that when we work together towards a common goal we can create a better society. www.uplift.ie