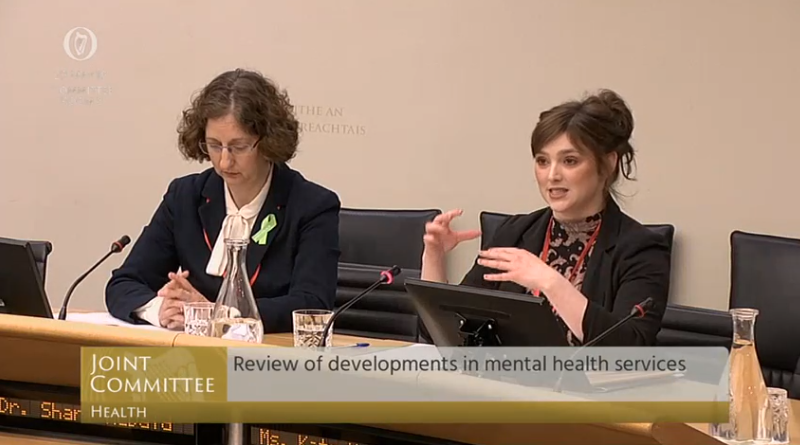 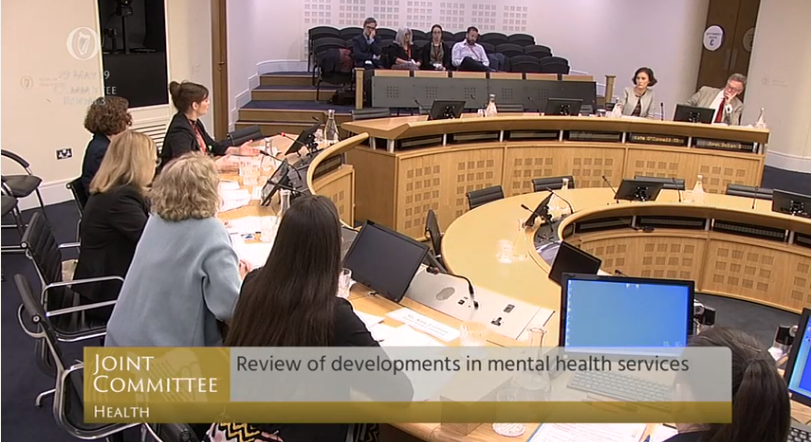 The focus was on a review of developments in mental health services. During the lengthy presentation, which the Mental Health Commission also contributed to, the panel discussed a broad range of issues being seen across Ireland in mental health services and supports. Some of those topics include funding for mental health, staffing levels, waiting lists, access to out-of-hours services for adults and young people in crisis, advocacy, consent, diversity and inclusion in services, dual diagnosis, housing and employment issues, disability rights, our national policy on mental health, and mental health laws.

Below is  a copy of the opening statement delivered to the Committee by Dr. Shari McDaid:

I’d like to thank the Chair and the members of the Committee for inviting Mental Health Reform (MHR) to appear before you today to discuss developments in mental health services in Ireland. MHR welcomes the attention been given by the Committee to this fundamental issue.

The cost of mental health difficulties is enormous, with figures suggesting this may amount to as much as 4% or more of GDP in some countries. This would equate to approximately €12.4B based on Irish figures. To put this in context, a research study on the cost of childhood overweight and obesity estimated the total lifetime cost in the Republic of Ireland to be €4.6B per annum. This equates to approximately 1.4% of GDP. Going forward, it is imperative that mental health is recognised and afforded appropriate priority within the wider health agenda to reflect its significance in contributing to the burden of disease in Ireland. This will require a substantial increase in mental health funding, including in Budget 2020, to both sustain existing levels of service, in addition to the development of new mental health services and supports.

I would like to draw to your attention three major issues of concern this morning:

I would like to acknowledge the positive developments that have been achieved across the mental health system, at local, regional and national levels, through the dedicated work of Government, its agencies, public representatives, direct service providers, and the community and voluntary sector. Achievements have included the development of clinical care programmes in areas such as self-harm, eating disorders and early intervention in psychosis, the introduction of a National Framework for Recovery in Mental Health and the piloting of advocacy services in child and adolescent mental health services. Positive developments have also been initiated at the primary care level with the introduction of assistant psychologists for children and young people, the expansion of Jigsaw services and the piloting of e-mental health supports. Mental health has also received significant attention in the political domain, through Seanad and Dáil debates and most significantly through the establishment of the Oireachtas Committee on the Future of Mental Health Care in Ireland. While this progress is welcome, it has taken place in the context of new challenges.

The shortfalls in mental health service delivery are further reflected in the lack of ‘out of hours’ crisis services for both adults and children. MHR is disappointed that the despite the recruitment of new staff, as part of the national roll out of 7/7 services across adult community mental health teams, only four additional areas are reporting a 7/7 service. As of April 2019, HSE Mental Health confirmed that there is currently no planned date for completion of the cost and implementation plan for providing 7/7 child and adolescent mental health services. A participant of MHR’s national consultation noted that “Outside of office hours [there is] no professional to turn to when in crisis- at the weekend for example. [It] makes no sense that people in this day and age still have to go to A&E as [a] first resort. [It] doesn’t help the patients’’

The Inspector for Mental Health Services has recently reported “appalling standards” in certain mental health inpatient units and the Mental Health Commission has recently published a report on the lack of physical health care monitoring of individuals in a number of inpatient services across the country.

No doubt, there is a myriad of additional gaps in mental health service provision, including a lack of resources in CAMHS which has a fundamental impact on access and quality of care. As of September 2018, almost 2,500 children were on the waiting list for CAMHS, of which over 12% were waiting more than 12 months. Lengthy waiting lists also exist in primary care psychology and there are significant challenges among particular groups of individuals, including those experiencing homelessness and people from ethnic minority groups in accessing timely and appropriate mental health services.

We are also deeply concerned with reports of poor quality in mental health services. Our My Voice Matters surveys found that:

In addition to the continued under-resourcing of the mental health system, there continues to be no national mental health information system to report on the full extent of service resources, provision, quality and outcomes for community-based mental health service delivery. For example, there is no data on the number of people in community mental health services who have an individual recovery/care plan, the number of individuals offered a talking therapy, the wait times for such therapies and the employment and housing outcomes for people using the mental health services. Mental Health Reform has been calling for such a system in budget submissions since 2013. It is not acceptable that more than 13 years after publication of A Vision for Change, there is no information system to account for the almost €1B in public expenditure on mental health care each year.

MHR recommends that an interim system for gathering key performance information on the mental health services should be put in place as a matter of urgency.

The restructuring of HSE governance and accountability structures in 2018 has led to the dissolution of the HSE’s Mental Health Division and National Director of Mental Health position. Despite the appointment of senior management officials responsible for leading on mental health operations and mental health service planning and strategy, it must be considered that such changes may have an adverse effect on driving the reforms necessary to ensure the delivery of a modern, recovery focused mental health system that adequately protects the human rights of adults and children.
MHR recommends that the post of National Director for Mental Health is restored to ensure coherent leadership in mental health at the national level and to ensure clear authority and accountability for a distinct, national mental health budget each year.

Protracted delays in reform of Ireland’s Mental Health Act, 2001
Mental Health Reform has consistently advocated for reform of Ireland’s Mental Health Act 2001, in line with the Expert Group recommendations on review of the 2001 Act, to ensure that people have their rights adequately protected when they go into hospital for mental health care. The Minister has recently announced that the General Scheme of the Bill on reform of the 2001 Act will be complete in June 2019 for the Mental Health Commission’s consideration. Given the lengthy delay so far, we are asking for a date for publication of the full reforming legislation before the end of 2019.

It is also of fundamental importance that the Mental Health (Amendment) Act 2018, signed into law by our President in May 2018 is commenced as a matter of priority to ensure that some small but significant changes can be immediately made to the 2001 Act. This includes that people are encouraged and supported to make their own decisions about their mental health care when in hospital.

MHR calls for the draft scheme of a Bill to reform the Mental Health Act, 2001 to be published before the end of 2019 and enacted within 2 years.

Many stakeholders were disappointed at the pace of implementation of A Vision for Change. It is imperative that the revised mental health policy is supported by a costed and time-lined implementation plan (as committed to by the Minister for Mental Health) and the establishment of robust monitoring and review mechanisms.

I leave the final thought to one of the participants in the My Voice Matters survey: “It has been 7 years since my first contact [with the mental health services] before I have gotten the help I need which I do feel the course of time waiting made a lot of things worse in my life’’

Thank you for your time. I look forward to your questions and comments.”