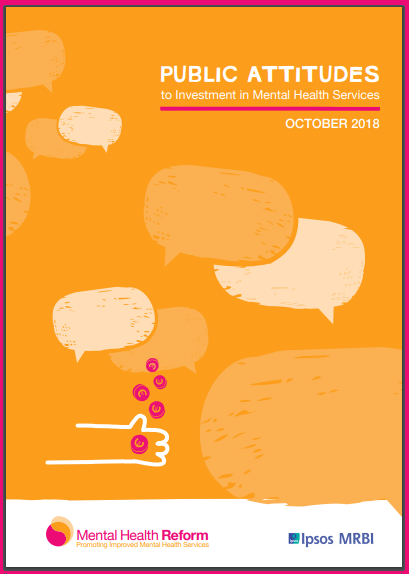 Survey results published today show strong public support for increased Government investment in Ireland’s mental health services. Commissioned by Mental Health Reform, the national coalition on mental health in Ireland, and carried out by Ipsos MRBI, the survey reported in Public Attitudes to Investment in Mental Health Services found that the public are willing to invest more in mental healthcare when compared to other related healthcare programmes. Similar attitudes were found even among people who do not have direct experience of a mental health difficulty. The report also found that 84% of respondents thought that the health service places too little focus on mental health currently, the highest proportion of six health problems measured.

Speaking at the launch of the report, Director of Mental Health Reform, Shari McDaid, said, “Ireland needs a real step-change in Government investment for mental health services to address the huge increase in need. This report brings clear evidence of the great value members of the public place on investment in the Irish mental health system and suggests that Government should substantially boost the priority given to mental health within the wider health system, in order to reflect the public’s concerns.”

Dr. McDaid continued, “We regularly hear stories of families and individuals struggling to get access to the mental health supports they need. Something has to change. In May 2018, over 6,500 children and young people were waiting for their first psychological appointment. Staffing in mental health services is still not even back up to the levels that were in place 2008. Even with investment by the Government of over €200M between 2012 and 2018, the system still cannot cope with the amount of people coming forward to access supports.”

“We need the Government to listen to the public’s concerns and invest the type of resources that will finally bring about parity of esteem between mental healthcare and physical healthcare,” Dr. McDaid concluded.

Summary of the key findings is presented below: